This post may contain affiliate links – I may make commission from any purchasesThe owl finch is not the most colourful member of the finch family, nor is it the largest or has the most … 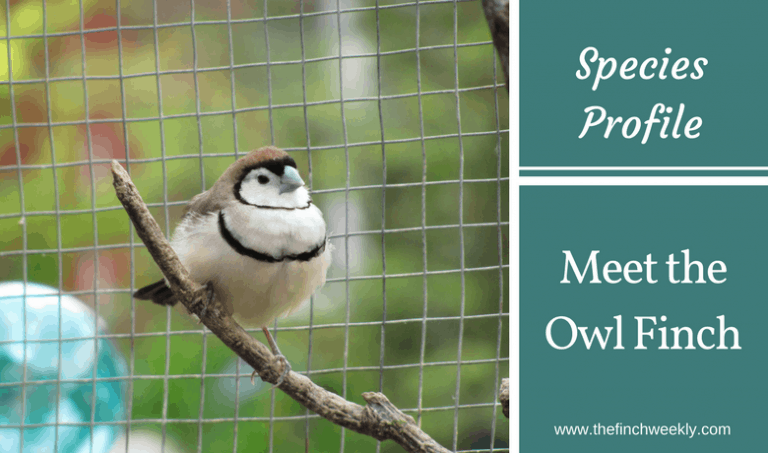 The owl finch is not the most colourful member of the finch family, nor is it the largest or has the most memorable song.  But there is something adorable about this tiny black and white finch that makes it an instant favourite with bird keepers around the world.  It is also one of the more confusing due to its many names – the Owl Finch, the Bicheno Finch or its ‘proper’ name, the Double-barred Finch as well as its Latin name, Taeniopygia bichenovii.

Just to let you know this post contains some affiliate links, which means that if you click on one of the product links, I’ll receive a commission payment.

Owl finches are members of the same family as the Zebra Finch, one of the most commonly seen faces in the aviculture world and can crossbreed with them.  They are generally smaller than Zebras and more delicate in body shape with both sexes being nearly identical.  Singing is the surest way to sex these birds though some breeders believe that the amount of black on the head behind the beak is another way to sort gender.  The thickness of the breast bar is also said to be a way to separate male from female and even the whiteness of the face mask but none of these methods are totally conclusive.

The Owl Finch has a white face edged in black with black behind the beak fading to brown along the back of the head.  The upper breast white as is the belly, with a black line separating the two.  Their backs are brown with a faint shading and along the edges of the wing are black sections spotted with white.  Their tales are black.  There is one known subspecies known as the Black Rumped Owl Finch where the rump is black.  In captivity, a fawn mutation has also been introduced where all the black and dark brown parts turn to a lighter brown shade.

In the wild, they are found in northern and eastern Australia from a western point at Roebuck Bay, across the northern part of Northern Territory to the coast of Queensland.  They live in semi-arid and sub-humid areas where there are plenty of long grass and pandanus palms as well as eucalyptus trees and bushes such as acacia.  They will also inhabit cultivated areas such as sugarcane fields, woodland edges and open woodlands.  They live in colonies from 4 to 20 birds, possibly more in the dry season and roost together in nests built for the purpose.

Keeping and breeding the owl finch

Owl finches are very similar to Zebras in their dietary tastes being primarily seedeaters who will do well on a good foreign finch mixture.  They will also enjoy egg food, greens and sprouted or soaked seed while access to grit is important for calcium.  Millet spray is a favoured treat food.

These birds are more delicate than the Zebra finch and should not be kept in an unheated aviary in most cases, as they are susceptible to the cold.

There are a variety of ways that Owl Finches can be kept from pairs in a breeding cage to colonies in an aviary.  They will nest in finch nest boxes, wicker baskets or make their own nest in a flight using dried grass, coconut fibre and even strips of paper, lining the nest with feathers and jute fibre.

They lay 4-6 eggs that are incubated by both birds for around 13 days.  The chicks hatch with dark skin and a tuft of fluff, much the same as a Zebra chick.  They fledge at 18 days and look much like the adult birds save for a greyer shade of beak and are fully independent at around 2 weeks after this.  The chicks have an unusual trait when weaning as they beg for food and raise the opposing wing while doing this, a trait noted more commonly in African mannikin species.  This is believed to be a trick to stop their siblings getting the food they are receiving.

Owl Finches are described as more difficult to breed than Zebra finches and can be nervous.  This means that nest inspections and lots of disturbances can lead to them abandon their nests or fail to nest in the first place.  Their chicks can be fostered to Bengalese or Zebras in an emergency.

More from this author

What are the Most Common Finch Health Problems?